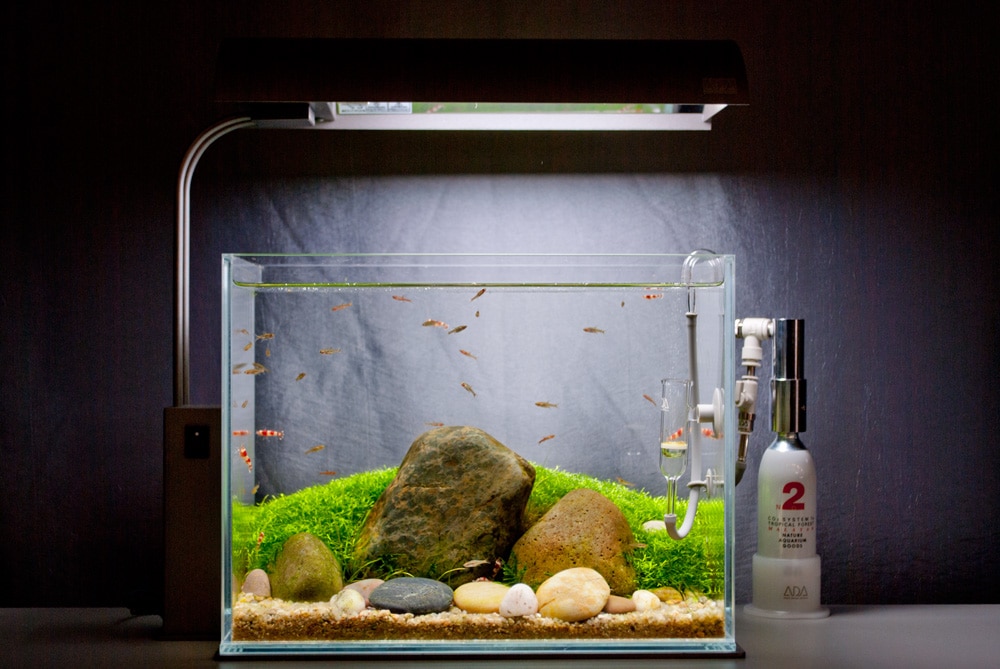 This is the second (middle) aquarium in the Triptych trio.

These aquascapes were planted by James Findley for the Aqua 2010 Trade Show. James explains that his inspiration for this piece came from the traditional triptych style commonly used for altars and ecclesiastical stained glass windows in churches: he describes how he wanted to present nature at her best and in all her variety so he used the traditional triptych form of presenting three art works together.

The overall effect is quite hypnotic. The aquascapes are each stunning in their own right but presented together as a triptych they create a sense of deep appreciation, exploration and discovery.

This modern and original twist on the traditional religious triptych symbolises the importance and central role of nature in aquascaping; nature is the inspiration for all aquascapes and to replicate her is the ultimate goal of any true Nature Aquarium. In other words, in the Nature Aquarium, she is God.

James explains that he wanted to ensure that the aquascapes were the main focus of the piece, so to achieve this he used;

Aquariums
James used low iron content glass so the glass is clearer and does not dull the colour of the aquascape. They are also rimless, braceless aquariums and have silicone work that is practically invisible

Lighting
James used ADA Solar Mini S/Ms for the lighting because these lights have a very minimal appearance that does not impact or detract from the strength of the aquascape. They also use an extremely good quality bulb that displays the colours of the aquascape at their best.

Accessories
ADA Glassware was used to minimise the impact of the CO2 diffusers.